‘Clerks 3’  is an upcoming  American comedy film.  It is directed and written by Kevin Smith.

It is the sequel to Clerks II  (2006),  and the third film in the Clerks  film series.  Nearly three decades later from the first,  Clerks (1994),  Smith is  coming back full circle with the third and likely final  installment of the Clerks  movie series.

The project is being financed by  Three Point Capital and  BondIt  Media Capital.  The executive producers are David Gendron and  Ali Jazayeri  for Three Point and  Matthew Helderman  and Luke Taylor from BondIt Media.

Lionsgate has acquired worldwide rights to the last film in the series.  Kowan acquired the project and will oversee the film for Lionsgate.  Kowan,  Grace Duplissea and Kaycee Holcomb negotiated the deal for Lionsgate.

All major cast members from the first two Clerks films set to reprise their roles. 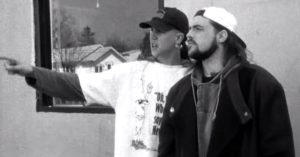 The movie picks up in the aftermath of Randal’s  enormous heart attack. (Not-fun fact: Smith himself experienced just such a near-fatal cardiac episode in 2018).  Dante,  Elias,  Jay  and  Silent Bob  are enlisted by Randal to make a movie that  immortalises  his life at the convenience store that started it all.

Smith has said that the film is inspired by his real-life experience.  In January 2021, he wrote, “This is a much more personal story than the previous incarnation, drawing directly on the heart attack that nearly killed me (3 years ago next month)”.

“It was oddly triggering writing those scenes, as it was the first time in a while I contemplated how close I came to shuffling loose this mortal coil. But far more than make me mindful of my own mortality, this script to  Clerks III  makes me laugh out loud.”

The film was originally announced in 2017,  when Kevin Smith  revealed that  Clerks 3  was off the table after a falling-out  with his friend Jeff Anderson who had played Randall Graves in Clerks (1994)  and Clerks II (2006).

Anderson had read the script but chose not to be involved;  Smith left the project and developed  Jay and Silent Bob  Reboot  (2019)  instead. Before two weeks from Jay and Silent Bob Reboot was released, Smith revealed that he had spent an entire day signing Clerks movie memorabilia together with Anderson and Jason Mewes (Jay).

This reunion allowed them to patch things up, and gave him so much inspiration. He instantly threw away the old script, and started working on a new one with ideas that Anderson was receptive to.  According to Smith, the film will be  “a movie that concludes a saga about how you’re never too old to completely change your life about how a decades-spanning friendship finally confronts the future.”

More Other movies are distributed by Lionsgate:

Fear of Rain: Cast | Plot | Release Date | Everything You Need to Know

On August 2, on  Kevin  Smith’s  51st  birthday,  the director posted the first image from day one of shooting, and fans ought to appreciate seeing  O’Halloran  and Anderson back behind the counter.  You can watch the image below:

Trailer and any video sneak peek is not available yet.

Smith’s  breakout film,  Clerks,  was released in 1994 and grossed $ 3.2 Million.  It followed a day in the life of two video store clerks, who spend their time lamenting life, love, and difficult customers. Widely considered a cult classic, Smith directed a  follow-up: Clerks II.  It arrived in theaters in 2006 and grossed $24 million in the U.S.

The sequel was not as well received as the original, but in the long period since then, Smith has been hard at work crafting what will likely be a heartfelt and funny third movie.

So, these are the major information about the third Clerks film. We’ll update this as soon as there’s any official announcement regarding this film. So, bookmark this page and stay tuned here for more updates.