‘Jumanji 4’  is  an  upcoming American fantasy adventure comedy film. It is a sequel to Jumanji: the next level (2019).

But, what can we expect from this film? Here’s everything we know about it so far:

Therefore, their real-world teen versions can be expected to make a comeback, with
Madison Iseman as Bethany

Whether or not Black returns,  both Gillan and Hart have announced they are both keen to see the films continue and are likely to return for their third outings.

The big hurdle, however, will be wrangling a shooting  schedule together which suits each star’s own enormously busy plans, Johnson is heavily  tied  up in several other projects, and Gillan is also set to return as  Nebula  for  Guardian of the Galaxy Vol. 3.  In this time, Jumanji fans will be eagerly awaiting any further information about when production may officially kick-off. 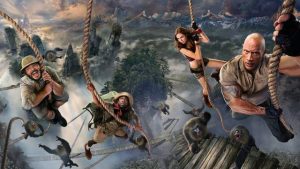 Plot details are not available yet.
Director Jake Kasdan and Dwayne Johnson have both revealed that The Next Level’s  villain  Jurgen  the Brutal would be disclosed as an avatar in the next film and that his  real-world  identity would be explored.

Indiana Jones 5: Cast | Release Date | Everything You Need to Know

It seems  like Jumanji is still a priority for  Dwayne Johnson,  who co-produced  Jumanji: The Next Level alongside  Hiram Garcia  and several others.

In late 2019,  Johnson hinted at a potential Jumanji 4,  and those plans were confirmed by Kasdan in March last year.

Garcia told  Collider  that the creative team behind the Jumanji franchise  is hard at work making sure that Jumanji 4 is the best it can be:

“That’s also in the hopper! We’re very focused on delivering the best version of that story. When you’re fortunate enough to bring a team back together for the third time you want to knock it out of the park. We need to deliver something big for the fans while still expanding on our Jumanji story. So we are drilling down deep and collaborating closely with our writers, director Jake [Kasdan] and producing partner on this Matt [Tolmach].”

After the massively successful follow-up,  Jumanji: The Next Level,  it seemed like a sure bet that a fourth instalment of the series would be in the cards.  But it’s  easy to see why  Jumanji 4  might be a bit of a logistical challenge,  what with an ongoing pandemic and an ensemble cast that’s in huge demand.

There’s no release date for this film.

Meanwhile to, keep yourself updated about new the Clerks 3  with our article based on the latest information.

Jumanji: Welcome to the Jungle  made over $960 million worldwide,  essentially making another sequel an absolute must.  That sequel,  2019’s  Jumanji: The Next Level,  marked yet another quality film for the franchise.  It also made a total of  $800  million at the global box office.

The movie is in the very early stages of development though as of  April 2020.  Kasdan explained,  “We’re just starting to talk about all of that,  and the truth is  we’ve  barely started  [on the film]”.

“We were just getting into the conversation before this global calamity and we will re-engage it as soon as everybody’s  settled.  We all love working together and we’ve loved making these.”

But, if you want to watch any fantasy comedy movie at this time, so you can visit  comedy movies hub  for the latest features..

Are you excited to watch it? Let us know in the comments section.