“Uncharted” is an upcoming American action adventure film. It is directed by Ruben Fleischer and written by Art Marcum and Matt Holloway.

The movie, serving as an adaptation of the video games of the same name created by Amy Hennig, was, you might recall, initially announced all the way back in 2009, since then, six directors – Travis Knight, Dan Trachtenberg, Shawn Levy, Seth Gordon, Neil Burger, and David O Russell – have joined and left the project.

But a seventh finally stuck in the form of Zombieland and Venom director Ruben Fleischer.

As hard as it is to believe, the long-in-the-works movie is finally go; and with shooting now underway, the internet has been given a first glimpse of Tom Holland in the lead role.

‘Uncharted’ Movie Cast: Who’s in it?

‘Uncharted’ movie storyline : What is the story about?

As it stands, plot details are scarce. But what we do know is that the story is now a prequel to the games, starring Holland as a younger Drake. He showing us details of how he came to meet and befriend Sully.

If the movie is anything like the games, you can expect lots of high-octane action sequences, dramatic fight scenes and a plot that shows us how Drake came to be the Lara Croft-style adventurer and treasure hunter we know him as today.

There’s plenty of content from the Naughty Dog canon to play with, from Drake’s Fortune and Among Thieves to the more recent Thief’s End and The Lost Legacy.

We can only hope the film will stay true to the source material while offering a fresh spin on the franchise and follows the trend of other much-loved franchises stuck in development hell, only to eventually pull it back for the fans.

More importantly, we’ve got those fingers and toes crossed for the film to break the video game-to-blockbuster curse. Holland and Hemsworth’s on-screen chemistry will surely help.

Release date of ‘Uncharted’: When is it coming out?

Uncharted movie is scheduled to be theatrically released on February 18, 2022, in IMAX, RealD 3D, and Dolby Cinema by Sony Pictures Releasing.

In April 2021, Netflix signed a deal with Sony for the right to exclusively stream upcoming films after their theatrical and home media windows.

Read more: ‘The Man from Toronto’: Cast, Plot, Trailer, Release Date and Everything You Need to Know

Why has the Uncharted movie been seemingly delayed so many times?

The film is being held up by a mix of scheduling and quality control. From what we’ve heard publically, each director and actor that had been attached to the film at one point.

But another eventually had to leave to work on other projects.

The Uncharted film seems intent on not being another bad video game film. There have been multiple writer changes as well. Neil Druckmann once commented in 2016, that they need to get the character relationships right for the film to work.

Though frequently marked by moments of fantastical realism, the Uncharted games have always been grounded in real-world history.

The journey of Sir Francis Drake, the myth of El Dorado, the lost city of Ubar–all these legends are based (at least loosely) on historical fact.

The Uncharted movie has yet to debut its first trailer. But we do have an in-costume photo of Tom Holland as Nathan Drake. 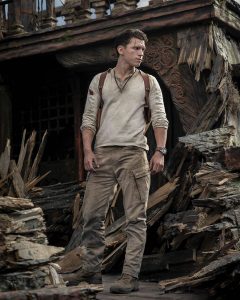 From this tiny snippet of the film, we can see that the Uncharted movie has done their best to replicate Nathan Drake’s signature look from the game including his iconic ring.

Uncharted is coming out in theaters on February 18, 2022 in the United States.