It is produced by Paramount Animation, WWE Studios, Walden Media, New Republic Pictures and Reel FX Animation Studios. Hamish Grieve is the director of this film.

On April 25, 2018, the film was announced with the title Monster On The Hill, based on the Monster on the Hill, a graphic novel of the same name by Rob Harrell, at CinemaCon in Las Vegas, the title was subsequently changed to Rumble. 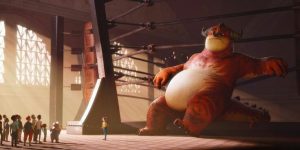 The story is about a world where giant monsters and humans collide and the monsters are superstar athletes and compete in a popular professional wrestling global sport called Monster Wrestling.

The story focuses on a young girl named Winnie seeks to follow in her father’s footsteps as a manager by coaching a lovable underdog monster named Steve.

Winnie decides to try and train Steve into a champion fighter so that he can go up against the reigning champion Tentacular.

45 days after the film releases in theatres, it will also be available to stream on Paramount+.

If you are looking the computer-animated film at this time, then you can visit  the animation  hub for the latest features….

Paramount released the official Rumble trailer online along with a teaser poster and a first-look image of Steve.

It seems familiar, that’s probably because the trailer’s been playing with  Paramount’s  Sonic the Hedgehog since it premiered in theaters earlier this month. If you don’t watch the trailer yet, so watch it here:

After numerous delays ‘Rumble’ is coming out in the United States on February 18, 2022, by Paramount Pictures. It is a good news for all the fans that are waiting for this movie.

The film is Will Arnett’s 2nd animated film voicing a monster, first film is Monsters vs. Aliens (2009) from DreamWorks Animation, which was also distributed by Paramount during the time of the Animation studio’s partnership.

So, these are the major information about the film. Are you ready to watch it? Are you excited for it? Do you like to watch computer-animated sports films? Let us know your views about this in the comments section given at the end of this post.