The 59th film produced by the studio, it is written by Qui Nguyen and Adele Lim.

It is directed by Don Hall and Carlos López Estrada, co-directed by Paul Briggs and John Ripa. This film produced by Osnat Shurer and Peter Del Vecho,  and music score composed by James Newton Howard.

‘Raya and the Last Dragon’ Cast

‘Raya and the Last Dragon’ Plot 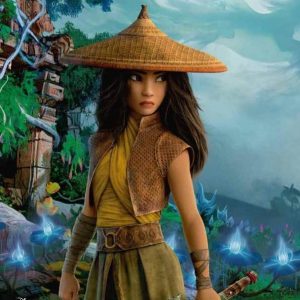 Long years ago, in the fantasy world of Kumandra, humans and dragons lived together in harmony. But when an evil force threatened the land, the dragons sacrificed themselves to save humanity.

Now, 500 years later, that same evil has returned and it’s up to a lone warrior, Raya, to track down the legendary last dragon to restore the fractured land and its divided people.

However, along her journey, she’ll learn that it’ll take more than a dragon to save the world—it’s going to take trust and teamwork as well.

This fantasy adventure looks gorgeously animated, and there are likely strong characters and positive messages. It’s like a mashup of Star Wars, Legend of Korra, and Game of Thrones and we love to see it.

Raya and the Last Dragon was originally scheduled to be released on November 25, 2020, but due to the  coronavirus pandemic, it was pushed back to March 12, 2021.

This was later advanced one week to March 5, 2021, with a simultaneous release on the streaming service Disney+.

‘Raya and the Last Dragon’ Trailer

The trailer has been dropped. If you haven’t watched it yet, so watch it here:

Regardless, the reaction to Raya’s first trailer seems to be overwhelmingly positive. Not only does the story look amazing, but its representation is applaud-worthy as well. Raya (who is voiced by Star Wars alum Kelly Marie Tran) is Disney’s first Southeast Asian princess.

People are super excited about her using Arnis (which are ancient Filipino weapons that have a lot of history behind them) in the trailer. Other Southeast Asian cultural references have not gone unnoticed.

Is Raya and the Last Dragon a musical Film?

Although Raya and the Last Dragon is being created by the same studio that brought us Moana. And Moana was a musical, it doesn’t appear that Raya will have any original singing.

The Disinsider confirmed this information back in July, stating, “The film which is said not to be a musical will be Walt Disney Animation Studios’ first original animated film since 2016’s Moana”.

The EIC of The Disinsider, Skyler Shuler, tweeted “Just learned, Raya and the Last Dragon will not be a musical” back in February 2020.

Just learned, RAYA AND THE LAST DRAGON will NOT be a musical. pic.twitter.com/dfITRrP3zY

A new Disney princess movie ‘Raya and the Last Dragon’ is set to be released in March 2021. Many are calling it the new Mulan.

Mulan has stood as a Disney classic since its debut in 1998. But the upcoming Raya and the Last Dragon could well overtake it in popularity.

It features a lot of the same elements as this Disney classic from 1998. But there are also quite a few differences that make it impossible to even consider a comparison.

However, fans will have to wait until 2021 to find out for themselves which film is the best of the two.

Are you ready to watch it? Let us know in the comments section given at the end of this post.