It is inspired by the French-language Swiss graphic novel Sandcastle by Pierre Oscar Levy and Frederik Peeters. It was shot on traditional 35 mm movie film instead of digital.

The film is about a vacationing family on a tropical holiday who discover that the secluded beach where they are relaxing for a few hours is somehow causing them to age rapidly – reducing their entire lives into a single day.

Shyamalan used the story as a starting point for Old. 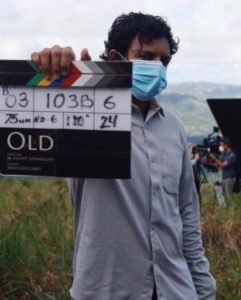 ‘Old’ is part of the director’s two-picture deal with the Universal studio which was announced in 2019.

On or about May 9, 2020, Old was in Pre-Production status. Principal photography officially began on September 26, 2020, in the Dominican Republic.

The Director shared the first poster for the film on September 26th 2020 and revealed the movie will be titled Old.

Old originally scheduled to hit the screens on 26 February, 2021. But the Universal Studios pulled it from the calendar amid the release date shuffle forced by the coronavirus pandemic. Then the film was released on July 23, 2021.

Universal Pictures has released an official trailer for ‘Old’ movie. If you haven’t watched it yet, so you can watch it here:

While all of Shyamalan’s updates have offered an intriguing window into this production, his post from the Old set on November 14, 2020, was arguably the most attention-grabbing one yet.

He captioned his Twitter photo with a brief update on production: “Two days of shooting left on @oldthemovie. Most of cast has wrapped. I’m exhasted [sic] and grateful.19 shots left till filming is complete.”

Two days of shooting left on @oldthemovie Most of cast has wrapped. I’m exhasted and grateful. 19 shots left till filming is complete. pic.twitter.com/RAmMf9alVL

‘Old’ has grossed $65.2 million worldwide. It received mixed reviews from critics, with praise for the cinematography and concept, but criticism towards the screenplay and acting. Themes and twist ending of this film received a polarized response.

Have you seen this film? Did you like it? Do share your views about it in the comments section given at the end of this post.