‘The Marksman’  is a 2021 American action drama thriller film. It is directed by Robert Lorenz he is also a producer of this film alongside Tai Duncan, Mark Williams, Warren Goz and Eric Gold.

Chris Charles, Danny Kravitz and Robert Lorenz are writers of this film.

The project, previously titled The Minuteman, was announced in May 2019, with Liam Neeson set to star. In September 2019, Winnick and Raba joined the cast of the film.

Also Read: The Northman: Cast | Plot | Release Date and Everything You Need to Know

Here’s everything about this film: 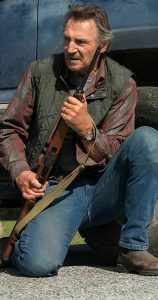 A rancher on the Arizona border, Jim Hanson  (Liam Neeson),  simply wants to be left alone as he fends off eviction notices and tries to make a living on an isolated stretch of borderland.

After being caught in a shoot-out, a dying Rosa begs Jim to take her son to safety to her family in Chicago.

Defying his cop daughter Sarah (Katheryn Winnick), Jim sneaks Miguel out of the local U.S. Customs and Border Patrol station and together, they hit the road with the group of killers in pursuit.

Jim and Miguel slowly begin to overcome their differences and begin to forge an unlikely friendship, while Mauricio and his fellow assassins blaze a cold-blooded trail, hot on their heels.

This actually looks quite good, despite the obvious gimmicky plot, especially with Neeson who is almost always superb.

Are you searching another movie of Liam Neeson? If yes, then do check it all about these films:

You can watch the trailer for that movie, below:

If you watch the trailer so let me know in comment section how was the trailer? Did you like it?

Liam Neeson feature The Marksman was theatrically released in the United States on January 15, 2021, by Open Road Films and Briarcliff Entertainment.

The Marksman was originally scheduled to be theatrically released in the United States on January 22, 2021 but it was later moved up a week to January 15.

Read more: The Asset (2021): Cast, Plot, Release Date and Everything You Need to Know

The film received mixed reviews from critics, who praised Neeson’s performance but criticized the film as being formulaic.

On Rotten Tomatoes, the film holds an average rating of 5.2/10. On Metacritic, it holds an average score of 44 out of 100 based on 22 critics, indicating “mixed or average reviews”.  Audiences gave the film a 73% positive score, with 46% saying they would definitely recommend it, surveyed by PostTrak

Neeson’s career as an action hero keeps clicking along years after allegedly retirement from the genre that made him a superstar.

Briarcliff Entertainment and Open Road Films was released The Marksman in theaters on January 15, 2021.

The scene where Jim and Miguel are in the hotel, and watch the classic Clint Eastwood western Hang ‘Em High (1968). Robert Lorenz, worked with Eastwood for many years as a producer and included this scene as a tribute to his mentor.

So, these are the major information about the film. Have you seen it? How you think this movie looks in comparison to Neeson’s  action movies  such as Honest Thief, Cold Pursuit and The Commuter. Do share your thoughts about it in the comments section given at the end of this post.