It is directed by Edgar Wright, with a screenplay written by Wright and Krysty Wilson-Cairns, based on a story by Wright.

‘Last Night in Soho’ will mark the final film appearances for Rigg and Margaret Nolan, who died in September and October 2020, respectively.

Cast of this movie will be led by Anya Taylor-Joy as Sandy. Taylor-Joy has become a go-to actor for horror-thriller movies since her breakout performance in 2015’s The Witch. 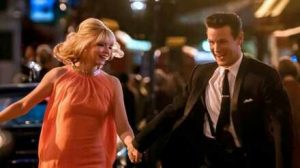 The Story Follows, A young girl, passionate about fashion design, is mysteriously able to enter the 1960s where she encounters her idol, a dazzling wannabe singer.

But 1960s London is not what it seems, and time seems to fall apart with shady consequences.

The film was originally scheduled to be released on September 25, 2020 but was delayed to April 23, 2021, due to the Covid-19 pandemic, before being delayed again to October.

Edgar Wright ‘s Tweet to His Followers about the Movie

Haunted by someone else’s past, but we’ll see you in the future… It’s true, #LastNightInSoho is not quite finished yet due to Covid 19. But, I'm excited for you all to experience it, at a big screen near you, on April 23, 2021. @LastNightInSoho @FocusFeatures @universaluk pic.twitter.com/zmPnAZICkb

“Haunted by someone else’s past, but we’ll see you in the future…” Wright wrote. “It’s true, Last Night in Soho is not quite finished yet due to Covid-19. But, I’m excited for you all to experience it, at a big screen near you, on April 23, 2021.”

The trailer is not available yet. Sorry for this. With a October 2021 release date, we can see the first trailer for ‘Last Night in Soho’ in the next month or two.

‘Last Night in Soho’ is finally coming out on October 22, 2021 in the United States. It is the good news for all the fans that are waiting for this movie.

So, these are the major information about the movie. Are you ready to watch it? Are you excited for it? Do you like to watch psychological horror films? Let us Know in the comment section given at the end of this post.