It is directed by Jaume Collet-Serra from a story by Glenn Ficarra & John Requa and a screenplay written by Michael Green, Ficarra and Requa, based on Walt Disney’s theme park attraction of the same name.

‘Jungle Cruise’ Cast: Who’s in it?

The storyline: What’s it all about? 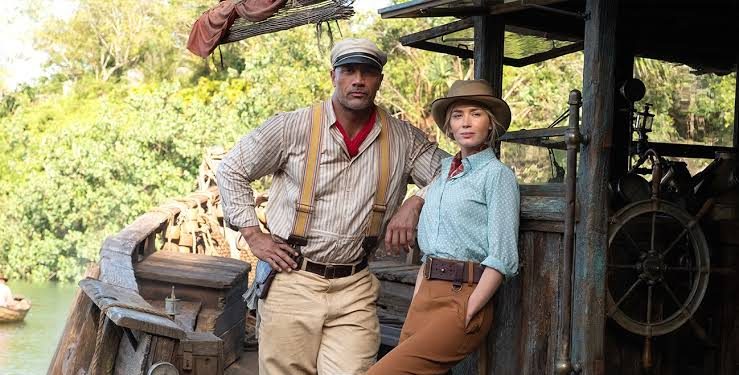 The Jungle Cruise movie is based on the Disneyland ride of the same name.

Johnson takes Blunt’s character Lily and her brother McGregor — played by British stand-up comedian Jack Whitehall, who you may recognize from the Good Omens series on Amazon Prime — on a mission to find a tree that has magical healing powers.

The journey will see them fight wild animals and compete against a rival German expedition, with Disney adding that there will be a “supernatural element.”

Johnson called Blunt’s character “the female version of Indiana Jones” in an Instagram post in June 2019, saying she has “relentless ambition to find the one, elusive magical thing that could change humanity for the better — forever.”

According to The Rock, his skipper character knows the Amazon River better than any other, and only cares about his money, his cat (his cat, it turns out, is a leopard named Proxima, Johnson revealed in an Instagram Live story on Oct. 11) and his liquor.

“Good luck lady in trying to change the world, and not falling for my charm,” he adds.

The Rock’s disastrous attempt to swing to safety on a vine and a submarine shooting missiles at them. “Everything that you see wants to kill you, and can,” he tells her.

‘Jungle Cruise’ Release date: When is it coming out?

It really looked like fans would finally be able to see Jungle Cruise on July 24, 2020. So, Johnson connected with his followers on Instagram, opening up in a brief but insightful video on Jungle Cruise‘s release date delay to July 30, 2021.

Where can I watch Jungle Cruise?

Finally, Jungle Cruise will release on July 31, 2021 after being delayed for 1 year from its previous release date. I’ll update this post once we’ve any update on this. That’s all for now.

Are you excited to watch this film?  What do you think about it? Do share your views in the comments section given below. I would love to take a look at them.