It is produced by Kristin Burr, Andrew Gunn, Marc Platt.

This is not the first time 101 Dalmatians was adapted in live-action. The 1996 film and its sequel were the first two.

The film itself is an origin story for Cruella, hence making it a prequel to the 101 Dalmatians story. However, as the film is live action, it’s not to be considered canon to 101 Dalmatians. 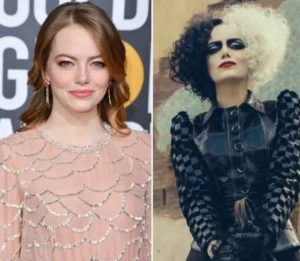 The film follows Cruella as a young woman — known at first as Estella. Teenaged Estella has a dream.

She wishes to become a fashion designer, having been gifted with talent, innovation, and ambition all in equal measures. But life seems intent on making sure her dreams never come true.

Having wound up penniless and orphaned in London at 12, 4 years later Estella runs wild through the city streets with her best friends and partners-in-(petty)-crime, Horace and Jasper, two amateur thieves.

When a chance encounter vaults Estella into the world of the young rich and famous, however, she begins to question the existence she’s built for herself in London and wonders whether she might, indeed, be destined for more after all.

When an up-and-coming rock star commissions Estella to design him a signature piece, she begins to feel as though she has truly arrived. But what is the cost of keeping up with the fast crowd- and is it a price Estella is willing to pay?

After years of speculation, in August 2021, we finally got to see what Emma Stone looks like with Dalmatians and a black-and-white ’do in Disney’s Cruella. 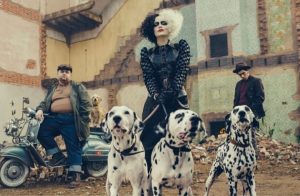 Cruella was previously scheduled to be released on December 23, 2020. But it was delayed as filming began.

The film received a PG-13 rating from the Motion Picture Association, “for some violence and thematic elements,” making it the second live-action remake/spin-off of a Disney animated film to receive the rating, following Mulan.

In March 2021, it was announced that the film will be released simultaneously on Disney+ with Premier Access in response to the COVID-19 pandemic.

The film is become the first major red carpet premiere since the pandemic began as it premiered at the El Capitan Theatre in Los Angeles on May 18, 2021.

The trailer has been arrived. If you haven’t watched it yet, so watch it here:

On April 7, 2021, Walt Disney Studios has released a second trailer. You can check it here:

So, how was these trailers? Do share your thoughts about this in the comments section given at the end of this post.

1. What does the name Cruella mean?

Cruella’s name is a pun of the words cruel and devil, an allusion which is emphasized by having her country house nicknamed “Hell Hall”. In some translations, for instance in Polish, Cruella De Vil is known as “Cruella De Mon”, a play on “demon”.

In the live-action Cruella, it is revealed that the reason Cruella chooses to skin puppies is that when short-haired dogs grow older, their fur becomes very coarse, which does not sell as well in the fur fashion industry as the fine, soft fur of puppies.

On January 1, 2021 Filming completed; editing of shot film; music composition and recordings, as well as sound and visual effects being added.

So, these are the major information about the film. Have you seen it? If yes, then how was the film? Did you like it? Let us know in the comments section given at the end of this post.