‘Babylon  2021’  is an upcoming American drama film.  Damien Chazelle is the director and screenplay writer of this film.

The film is produced by Olivia Hamilton, Marc Platt, Matthew Plouffe and co-produced by Padraic Murphy.

Executive producers of this film are Helen Estabrook, Tobey Maguire and Adam siegel.

Brad Pitt will play the role of a fallen actor in Damien Chazelle’s ‘Babylon (2021)’.

But, what can we expect from this film? Here’s everything we know about the upcoming movie so far. 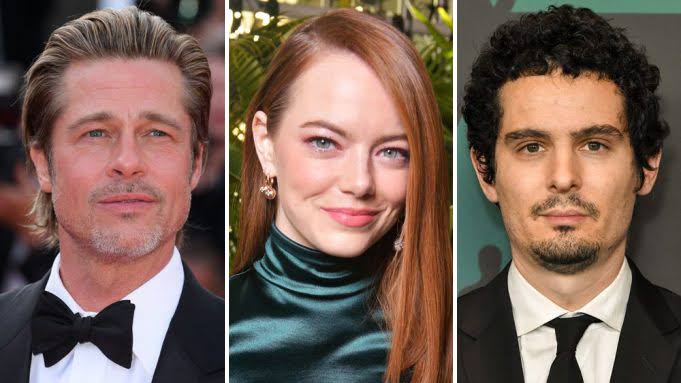 Reports suggest that Brad Pitt will portray John Gilbert, a real-life figure, who rose to fame with  the silent films. He will be a silent film star who fails to make the transition to the new technology.

Also Read: Brad Pitt joins the cast for ‘The Lost City of D’ | All Updates

According to reports, Meryl Streep is considered for the role of British author, journalist, and screenwriter Elinor Glyn.

On the other hand, Tobey Maguire might portray the ace Hollywood producer Irving Thalberg and Michael B Jordan will essay the role of a fictional musician, who is modelled on Louis Amstrong.

Emma Stone was set in a pivotal role, along with Brad Pitt. But, Stone has opted out of the movie, and the role is eyeing to be recast with Margot Robbie.

Are you searching the new comedy film  of  Emma Stone? If yes, then check out all about  Cruella.

Very little has been revealed about the plot details.

The narrative of Babylon (2021) will follow the growth from silent films to talkies. The movie will see both fictional and real characters, similar to Quentin Tarantino’s ‘Once Upon A Time In Hollywood’.

The novel will portray the  Golden  Age of Hollywood.  It would be quite interesting to watch if Chazelle will be able to do justice to the critically acclaimed silent film era.

Glimpsing a movie of such a reputed director has always been a pleasure for movie fanatics and critics. They’re excited to see what new does this director brings in his 6th movie.

‘Babylon’ release date: when is it coming out ?

Paramount pictures  secured the worldwide rights to Babylon, according to reports. Insiders said Paramount was competing with Lionsgate to secure the distribution rights.

Insiders also said the studio was previously dated the film for a December 25, 2021 limited release, with planned to go wide on January 7, 2022.

But Paramount has pushed the movie’s release date back a full year to December 25, 2022 limited release, with a wide release on January 6, 2023, (in the United States) due to COVID conditions delaying filming.

Paramount will also put the movie on the festival circuit since it’s rare for a movie to debut in December without any festival presence and go on to win Best Picture.

Still, by putting together two Oscar-winners Chazelle, and Pitt, you’ve got a potent combination.

So, these are the major information about the film. It looks like we’ll be waiting quit some time before we see Pitt in action. Are you excited for it? Do share your thoughts about it in the comments section given at the end of this post.