Elvis is an upcoming biographical drama film about Elvis Presley. It is directed by Baz Luhrmann, from a screenplay written by Luhrmann and Craig Pearce.

It is produced by Gail Berman, Baz Luhrmann, Catherine Martin, Patrick McCormick, Andrew Mittman and Schuyler Weiss and Rory Koslow is the executive producer of this film.

There was a time, quite recently, when it seemed that music biopics were all the rage in Hollywood with the release of the Queen-inspired Bohemian Rhapsody, followed by Rocketman with Taron Egerton as Elton John, and production of an Elvis movie taking off years after it was greeenlit.

However, that all changed when the film’s star, Tom Hanks, contracted Covid-19, and the pandemic became the most talked about thing in the movie (or any) industry today.

Like most film productions lately, the movie recounting the prolific career of the man dubbed the “King of Rock ’n Roll” has been at a standstill since health safety policies were put in place on a global scale.

Also like most highly anticipated films, the fate of its shooting schedule since the outbreak has been a relatively hot-button topic, not just over concerns for its already adjusted release date, but more importantly, for the safety of its cast and crew.

It was previously scheduled to be released on November 5 and October 1, 2021.

The studio tested with a handful of actors in full hair and make-up at the end of June to see who would join Tom Hanks, who is playing Presley’s manager, Col. Tom Parker. 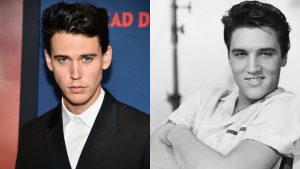 The project marks Luhrmann’s first film since his adaptation of “The Great Gatsby” starring Leonardo DiCaprio, he most recently worked on the Netflix series “The Get Down.”

According to variety, Elvis was delayed to 2022 because it’s still in production and sources say the film has another five weeks of material to shoot so it wouldn’t have been completed in time for its original release date.

It was also reported that the film was not part of the announcement by Warner Bros. Pictures to debut its entire 2021 slate on HBO Max alongside a theatrical release, before the film was pushed to 2022.

Chronicles the life and career of rock and roll legend Elvis Presley. This film explore his relationship with his manager who’s being played by Tom Hanks.

At this time there is no trailer out for the biopic. If there were a trailer, so we would know more about the movie. A trailer release will also give way to further speculations about the film as well as the story and other essential details.

So, we’ll update this as soon as there’s any official confirmation about the trailer.

So, Are you excited to watch this film? What are you expecting to see in the upcoming movie? Do share your thoughts about it in the comments section given at the end of this post.